Part 1 – CHECKING IN WITH REALITY
OK, so first to be brutally honest about the reality facing me on day 1 of development. As some of you may know I have a product(currently) called Slice. It’s been called “Grid Machine – Slice” and “GM-Slice” in the past, but the last version I released (in the second half of this year) was essentially version 4 of Slice. So I’ve been working on a loop/slicing tool called “Slice” for over 8 years now.
Frankly sales of this version have been terrible. This was the first time I’d not used one of the distributors to sell a product, but I had a pretty good email list so I thought it might be good to give it a home-site approach. Silly me. A handful of sales only, and I mean a handful – not even double digits.
Those 8+ years of effort have meant that the product has a LOT of functionality, and every beta tester and every demo producer who has worked with the product has been really really nice about how good it is. So some logical part of my brain should have said “well its just a distribution issue” and caved-in and gone with Kontakt Hub or similar. Of course I’m a developer so some other part of my brain rejected that idea in favour of “well its just not got the right/enough functionality or the right UI, I can fix that myself!”
Yeah, delusional, so possibly silly me, we have yet to see. I may eventually go with one or more of the distributors, but as I haven’t reached the “Great! functionally done!” in the developer part of my brain then it’s not released and we don’t know.
You know what? This feels weird, I feel like this is the marketing personality writing this, and the developer personality who doing the work – split personalities already…and they are not listening to each other!…..grief.
So the developer in me wants to tweak a couple of things at least. One is the UI – Slice has had progressively improving UI’s but even the latest looked busy – It’d be nice to clean that up even further. There should be an image attached of the design layout of the existing UI so you can see where I started. Also there’s a long-standing issue when you slice loops. Slice is mainly used for drum loops, and if the loop isn’t precisely played/recorded in time then some slices have issues. For example if the beat is played early then Slice will “miss” some part of the start of the beat, and worse include the start of the next beat at the end of the slice, giving either little clicks and bumps when playing slices out of order. Now these are infrequent and can be good, but it’d be nice to work out how to optionally remove them…. so off we go. 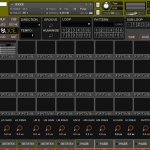