PART 2 UI CLEAN UP
So I started with the UI clean up. I had some ideas and simplifying was the main aim. Slice is a loop tool, sure it does a LOT to the loops but loops are what it uses, so I moved the loop selection to position 1A (top left) of the UI and shuffled everyone to the right. In terms of workflow it felt right. Next was those “in slice” buttons, there are 5 displayed under each slice pad at any time. I managed to get the buttons integrated into the pads themselvesso they didn’t look like they were floating about in space waiting for a bus…, this had the added advantage of the pads being bigger – sure you couldn’t press the pad that was “under” the 5 buttons but it looked nicer.
Then of course it was a simple realisation(and letting go of it) that allowed me to change the rule for displaying these 5 buttons. In Version 4 of Slice you EITHER had the Voice buttons on display OR the Sound buttons. I changed that rule to: EITHER the Voice buttons OR the Sound buttons OR NEITHER. So if you are not working with Sound or Voice than they are hidden and the UI looks a lot simpler, AND there’s more pad space to press…
Finally whilst doing all this I managed to work out a kind-of design pattern for the UI. This is a simple set of rules for background section definitions, and ALL buttons are dark when off and light when on etc. Skinman design attached. 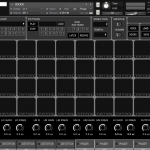