As I mentioned, you could add a CC control to modulate the overall Loop-level Pan control any time you wanted. Possibly usable, but not very friendly of easy to configure.

I’d built a set of modulation controls in Formation, and even refined them since. How hard could it be to build a simple Pan Modulator and its Dialog? Turns out not really so hard at all. I built a set of controls and made them pop up in the space that would vacated by hiding first two rows of pads.

So now I had Pan back as something the user had better control over. I used the refined dialog to let the user select the number of steps in the modulation(4 to 32), the tempo, a retrigger on note start and a random amount to be added to each step(0 to 20), so in the end a useful modulation source.

The nicest results for modulation in Formation were using a modulator as a kind of volume gate (Trance Gate to those of you into those dance-y genres), and sitting right next to Pan in the Loop-level controls was, Volume. So it was a no brainer to add a modulator for Volume too. This might occasionally be useful for drum-loops, but I was pretty sure it would be great for pad, keys, basses, and guitar loops etc.

Further I could do this to the groove setting too, also up in the loop level controls.

Now I had a problem. What was the sensible tempo for these modulators? Well its nice to let the user set the tempo, but free-running volume modifiers can give you ugly artifacts, so I wanted the tempo sync-ed to the sound generating engine, basically the steps of a pattern. Sound generation was at a defined tempo for pattern playback, and fixing the volume and pan modulator values to sync up with each pattern step in turn was the best sounding approach for pattern play-back. But I wanted different time signatures not available in pattern mode(like 1/16 triplet feel) for pitched and stopped mode playback.

Under the hood this meant yet more changes to the way tempo was handled, painful changes but moving to a more generalised “Clock” possibly useful in other areas of the product one day. So that’s when the timing issues started to show up.  Remember I said something was coming back to bite me? If you listen closely you can hear me crying out with shock and dismay…

Meanwhile here’s the modulators screen design and a track of panning and gating sounds using a drum loop and two “cinematic sounds” from Orbiter. 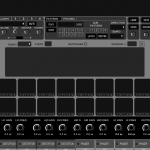