So I’m driving to the day job again, just like every other morning, when I have an epiphany. Well no I didn’t but I did have a good idea that made me feel good. You remember our clicks solution? An envelope. It works but it cuts off some of the slice(in the attack portion), what would have been better would be to allow each slice to slide its start position forwards or backwards in the overall loop wav file.

I’d tried all sorts of Abelton Live/Recycle-like interfaces to define these positions, I’d even had a POSITION tab at one point (you may recall in the original Orbiter UI design) where you could hand-apply these sort of things. For some reason I’d never thought of the (now obvious) solution of just replacing one of the pad effect buttons with an offset effect button that would allow each pad to slide its start position forwards or backwards by a few hundred milliseconds. Took no time at all to implement.

But as usual someone(one of the pad effects) had to get sacrificed. This time it was the Pan control. I know, I know Pan is MUCH under-rated as an effect, but there already was a loop-level pan control which you could automate with some CC-control if you wanted. The trade was worth it. It seems to work absolutely perfectly – always a bad sign…. I must have forgotten something. And I had, more than one thing, and they were coming to bite me, but more on that later.

Meanwhile, whilst I’m here: You should never under-estimate playing with a thing as a way to make it clear what needs doing next. I’d got quite pleased with myself (pride before a fall) with the 4 loop playback, and I spent a fair while just playing the product. What became clear was it really would be much more of an instrument if I added key-switches to mute/unmute each loop, so I added those too, and rearranged the loops section a little. Now I could really “play” Orbiter, like a proper deck or instrument. Deck? Did I say deck? Suddenly I’m some sort of urban street DJ person….. not as if that’s a bad thing but one look at me in the flesh will tell you how unhip I really am. Still it’s a sign Orbiter is usable and useful as an instrument, in the same way a set of decks is/are/can be. 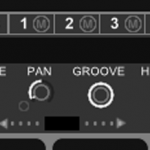