All those mixed capitals and lower case in the title of this make me feel a bit queasy for some reason…..

I thought I’d talk about something other than Orbiter for a change. Orbiter is done but will take a fairly long time to reach the public given the amount of loop making, mastering to tape and resampling that will be going on.  So let’s talk about another engine – Formula.

So some background before I talk about what’s happening.

In 2015 I built a ROMpler engine. I built something pretty simple (by my standards) – it played a single voice in each instrument, it had Gain, Pan and Glide controls, Unison capabilities, a volume based envelope and a trance gate as well as Vibrato and Tremolo controls. This was connected to the “standard” FX module, so 4 insert effects (with tons of different FX to select from) and 4 send effects (with the standard 6 send effect options to select between).  Across all this was a targeted modulation system that allowed all sorts of nice things to happen to each control. All very nice, but as usual whilst building this I had an idea to extend it. It seemed pretty straightforward to double the sounds being played, and to make one of these sounds use the Kontakt internal Formant engine. So I did that, dividing the UI down the middle (Normal voice on the Left, Formant voice on the right). I doubled the Pan, Send and Glide controls and added a Mix option to replace the Gain control. The Envelope and Gate stayed managing both sounds at the same time. I added the Formant controls to one half of the interface and started experimenting with samples. All worked well.  I called it “Formula” – well it was using the Formant engine.

To cut out some of the boring stuff here I ended up working with Zero-G on a product using their sounds and my instrument, which used this ROMpler engine and the (then) newly created “Sequencing Arpeggiator”. You can go take a look(even buy it) at Zero-G, it’s called Formation (did you see what I did there with the name and all that?). It came out in the middle of 2016 (these things never take a short amount of time to do…)

So here we are in 2017, and I started work on version 2 of the Formula Engine. There’s a long(ish) story about another 3rd-party sound designer and his indignation at me for not including Low pass filters and LFOs – more synth-like features in Version 1. Truth is in the version from 2016 they weren’t there, but he was right, a whole range of synth-like features would be useful, he just went about asking for it in an undiplomatic way (really I still laugh about it …). So when it came to the time for Version 2 these filters and their LFOs were on the list to add.  Here’s the list:

So in the first 3 months of 2017, when I wasn’t working on Orbiter, I added all these features. Only one of them proved troublesome – the volume envelope for some reason wouldn’t play nicely with the Formant engine – it kept blipping some of the audio on key release. I tried all sorts of things to fix it (including adding lag – for all you Kontakt experts). In the end I had to create my own script based Attack and Release processing – so no envelope for volume just attack and release controls. But even this effort has got me thinking about volume based envelopes and what I can do with them -but that’s all for a later product.

Anyway now it’s done.  So what next? I’ve decided to create a range of ROMpler products all under the “Folio” banner, first will be “Folio – Basses”, others in planning are “Folio- Keys”, and “Folio- Synths”. There may be others too. I ran out of FORM-based names, well there’s Formica, ReForm, Format, but I didn’t like any of them. So back to the story…..

I’ve decided to market the product in a new way for me, I’m going to give some stuff away. Partly as it’s “UK City of Culture” where I live in Hull, and this quarters theme is “Made In Hull”, and I wanted to make a little contribution to that and give away something that was “made in Hull”, as well as to see if free-stuff would encourage buyers.

Specifically this is  a set of instruments that use the Formula V2 engine and some freely-available audio material, these are called “FreeForm” (there I go again with that “Form”-naming game..).

FreeFrom Volume 1 features 40 instruments across a range of audio sources, cinematic sounds, basses, keys, guitars, synths etc. Nearly 1 Gig of audio – through Formula’s synth-sampler hybrid approach really really doesn’t need a lot of audio material in order for it to produce interesting results and work well. These instruments are ready to go, video manual done, zipped up and on the site. Go there now (the Free-Stuff page) and download this free product. Have fun…

Coda: So far 24 hours in and 200 people have downloaded it. 2 people have had problems, one of them is now sorted and the other seems to have bigger audio issues than a Kontakt instrument. So all going well so far (fingers still crossed).

Coda 2: Well past 500 downloads now and no reported issues. 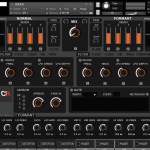