So in the end I went overboard a bit and also gave myself a bunch more work to do, are you seeing any sort of pattern here?

I bought a Revox B77 Mark II on the interwebs, sight unseen. I went to collect it (it was about an hour away driving) to find it was a 1980’s vintage piece of gear that hadn’t been used for near 20 years. I got it for a good(ish) price, and the guy selling it showed me at least that it could play tape. Getting it home it was clear that it needs a fair amount of TLC, so I’ve been cleaning the heads and running gear for a week or so, a process that involves chemicals , cotton buds and patience. Given how unloved it had been its taken a while, and I still haven’t tried recording anything yet. Getting the requisite cabling(that will fit it) is also taking more than one go, and tape stock is no easy thing to either get or to decide on (911 or 428?? – yeah me neither).

In truth I’m a bit frightened that it might not record anything and will need some major servicing and repair. The only two places I can find that will do that are a long way away from me (this thing is heavy and doesn’t fair well with couriers apparently) as well as expensive. I’m vacillating and putting it off.

Now you’d think I would be happy at that point no? Well apprehensive and unwilling to try anything else at least. Oh how little you know of me…

To be honest this next purchase was an accident, there was at one point so many tape machines on eBay that I could bid on I got lost in what I’d bid and missed. I ended up also buying and getting forgiveness for (from my long-suffering partner) a much older machine, an Akai M-8. Luckily I also got this pretty cheap too.

Now this is not a pro-machine in that it’s not 15IPS mastering two track, like the Revox, instead, its’ just 7.5IPS, stereo 2-two track (so 4 tracks then) consumer device, but with a nice couple of features (well one feature but you get two of ’em) . Akai made the M-8 in the 1970’s so yeah its 40 years old, but its built like a tank. Insanely it feels like it weighs nearly twice as much as the Revox, it nearly killed me carrying it into the studio. But just as important (possibly more so) than its tape recording capabilities is the way it amplifies signal. It has two open-ended class A valve amps to do this. These come with routing that will allow me to use the valve amplifiers in all sorts of interesting ways. But just like the Revox I’m pretty sure no one has cleaned the tape-heads in 20 years. It’s next on the repair bench.  So I have a range of tape machines and now antique, unique, valve-based amplification to add in to the mix. All my audio should sound great! If I can get all these machines working. 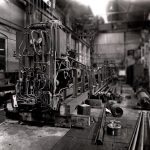