OK, so a few weeks had passed by now and it was nearing the end of the year. I had a lot of new and useful stuff in there. So a launch date for Black-Friday/Cyber Monday had disappeared in the rear-view mirror and so had any Christmas landing. Plus I had to go to New Zealand for some family issues.

So the choices were either A. knuckle down to long nights of effort – with no guarantee of getting to a good release date in 2016, B. Relax, do (nearly) nothing and wait for a Q1 2017 release. Or C. Stay on the development track, build as good and fully featured product as I could (I already had a name for this “ultimate looper” : Orbiter) adding new features thru Q1 2017 and then release later in (maybe Q2) 2017.

Guess which I decided on?  Yeah: C —- Sometimes I despair at myself…

So I built a UI design for Orbiter.  I’d been a heavy user of Stylus RMX once in my producer days, so I knew what the competition was. I wanted to do all the useful things from Stylus, plus a bunch more.  Slice already did things Stylus can’t, like playback different patterns(reordering loop elements) and play formant-based noises etc. So I was off to a reasonable start. But I also knew I’d need simultaneous play-back of multiple loops. My experience with Stylus also told me that I nearly never used more than 4 loops at once (it just gets too crowded in there) – so 4 loops at the same time was a compromise, but a reasonable one, if in the end I could get to 8 loops (Stylus’ limit) simultaneously then great.

I also wanted pitched (done!) and maybe a phrase player too, as well as even finer grained control over slice start and playback position. A screen shot is attached. I added a POSITION tab where the user could hand-manage the start and end point of any slice(so I was fiddling with those clicks and bump noises again), a PHRASE tab where the user could record a little phrase, or sequence, of their own making, and play that back. Plus 4 META-TABS where you could select the loop you wanted to edit/work with.

All these things meant moving the FX off to their own tab (no longer enough real-estate on the main page), but I’d done multichannel mixers before so a 4 channel one in another Script slot in Kontakt, with FX display and editing should be a cinch. It was, but it was also anemic (there wasn’t much beyond a Gain slider, pan, and mute above the existing FX panel moved from the original).  Anyway, off to NZ (60 hours flying in a 120 hour timeframe) and plenty of time to think about it.  But even before I left I wasn’t looking forwards to either the flights or the new UI implementation – it just didn’t feel right. 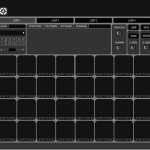