So it may be obvious that I’ve been re-using lots of code I built in other products (like Formation, Cadence and Slice itself) as well as more general modules like the effect and modulation systems. There are lots of other things laying around here at CR headquarters (well on the cloud-drives anyway). Which led me down the following garden-path….

So when Orbiter ISNT playing a pattern then pressing a key gets you a specific slice of the loop, or (in pitched mode) a re-pitched version of a named-slice. So in “Stopped Mode” you *can* just play the loop through by pressing each slice-associated key in turn – sure loading up a pattern then pressing play on the pattern tab is way easier, but you could do-it-yourself if you wanted.  Plus you could press those keys in all sorts of different orders to get your own hand-rolled pattern. So one way to think of Orbiter is as a kind of ROMpler with sounds under each pad/key and a sophisticated pattern player bolted on.

So thinking about that – two ideas came to mind – it seemed pretty simple to assume that if I wrote a little (say 8 track) sequencer on the front of Orbiter to play specific pads that might be a nice addition. Unsurprisingly I have one of those lying around. I could just wire it up and see if it worked. This thought came early in the journey home from work, but before I’d got home this other thought occurred to me:

“You know what? That was the original idea for Formation – build a little sequencer on the front, but in the end this turned into the MUCH nicer Sequencing Arpeggiator that got shipped, why not just use that instead?”

Now if you haven’t seen the “sequencing arpeggiator” in Formation, well you should. It’s really unique, and really powerful.  It “listens” for up to 8 key presses, and for each key that is pressed (in order) instead of playing the associated note, like any other arpeggiator, it has a  little independent 16 step one-note sequencer it associates with that note and it plays thru that sequence repeatedly. Yeah, it’s hard to visualise based on a textural description but it sounds great and its clearly obvious when you see it in action. You can do loads of very very cool things with it from standard arpeggiator patterns to rising and falling polyrhythmic shapes, chords AND runs at the same time or after one another etc.

It needed a few things taking out of it to make it work with Orbiter, but removing stuff is (sometimes) easier than adding so I did a quick UI sketch (based on the existing arpeggiator). It looks do-able. But the nagging voice in my head is now saying “you are making this all too complicated…” And perhaps that is true, but its also really cool stuff. Conflicted now. As it stand’s I think I’ll schedule this in Version 1.1.

Oh the second idea? Well “Orbiter is as a kind of ROMpler” means you could use other sounds than loop slices, so it wouldn’t be so hard to turn Orbiter(or its engine) into a drum machine, and a pretty unique and powerful one at that. Another day perhaps. 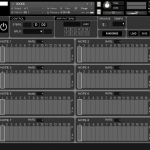